Once Upon A Time With Morricone

In a previous life I used to make documentaries. In 1999 it was my great pride to be asked to write and direct a documentary, Once Upon a Time – Sergio Leone, to coincide with the 10th anniversary of this great Italian director’s death.

You can’t talk about Leone without also mentioning his lifelong friend and musical accomplice Ennio Morricone. So it was that our researchers scheduled an interview to take place in his apartment in Rome. This was the first interview of many that we would conduct for the production and on the appointed day I set off nervously with my Italian-speaking producer, who would act as translator for the interview. We were nervous not only because this was obviously an important interview but also because the scene had been set by his PA who informed us that he always insisted on being addressed as Maestro.

His apartment was grand, in the classical Italian style: dim lighting, archways, alcoves and heavy drapes. As we set up in the living room we were told that we were free to take some general shots but that we must not, under any circumstances, film near the window. My producer explained that the view outside the window was of a very famous monument and that if we had filmed this all Romans would have immediately learned where Morricone lived.

About half an hour later the rather serious and imperious Maestro appeared. From the start of the interview he made it quite clear that in his opinion his relationship with Leone was one of equals. His role as composer was not merely that of a hired hand but that he saw his job as being of equal importance to the actual filming and that he enjoyed working with Leone particularly because of the importance which Leone gave to the music of his films. 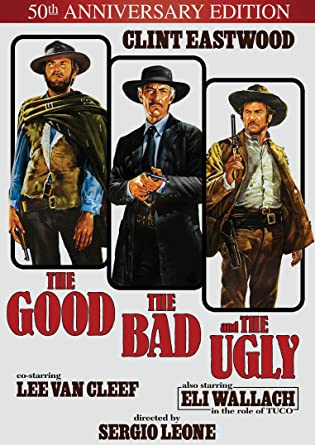 And who could disagree? You only have to see the poster of The Good, the Bad and the Ugly and your brain starts to hum the signature theme.

He explained that prior to working on film scores he had been very active in researching avant-garde music and that in this realm the use of sounds was often given as much import as the musical notes.

Thus it was that when he composed the music for Leone’s first film with Clint Eastwood, Fistful of Dollars, he used a variety of bells, whistles and abstract vocal yelps that would establish the tone of all the films scores he composed for Leone's westerns.

Link to Fistful of Dollars theme

By the time he was composing for Leone's third film the range of effects had taken on an almost symphonic level using gun shots whips and whistling and animal yelps.

Link to The Good the Bad and the Ugly theme

As far as he was concerned these were all part of the musical pallet. In fact his involvement with the avant-garde was more than a passing fad and from 1964 up to their eventual disbandment in 1980, Morricone was part of the Gruppo d Improvvisazione Nuova Consananza, a group of composers who performed and recorded avant-garde free improvisations.

I asked him if he composed at the piano and he scowled, saying, “Only amateurs compose at the keyboard. I write directly onto the musical page.”

In my mind I wanted to challenge him with the retort, “Do you mean amateurs like Beethoven?” but I was awestruck by the thought that he had mastered music notation to such a degree that could write directly from his musical imagination with no need to be reminded what the notes sounded like.

He went on to explain how he composed the music for Leone’s films before the films were shot and that Leone would often use extracts of his music to play on set to help create an atmosphere before a take.

He then explained how his love of the avant-garde prompted him to take Leone to a see a performance artist perform Symphony for a Metal Ladder, in which a heavily amplified set of steps was used to create a whole range of weird and wonderful sounds. This, he explained, gave Leone the inspiration for the opening scene of his epic western Once Upon a Time in the West. 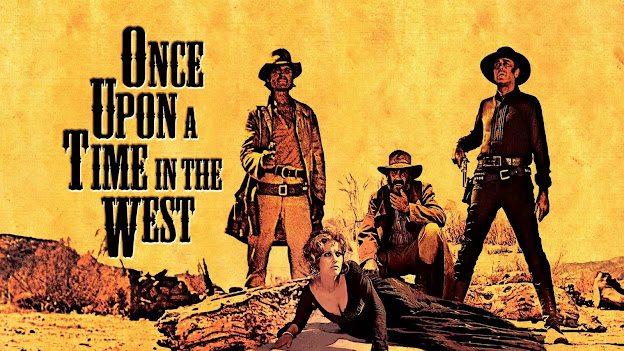 If you haven’t seen it, I recommend the whole movie, but the opening sequence must certainly be one of the most transfixing opening scenes of any film. Seven minutes of sound symphony as three gunmen await the arrival of a train at an isolated and primitive railway station. Throughout the whole sequence the ‘musical beat’ is maintained: the repeated rusty squeak of a dilapidated windmill used to pump the water for locomotives.

In a later sequence, music also composed prior to filming, Claudia Cardinale is seen arriving at another railway station. She is arriving to meet her fiancé who is not at the station to greet her and the music somehow captures the romance and deep sadness of the scene. Leone was able to use the music and its crescendo to choreograph this single shot and its reveal of the bustling town that is springing up in response to the arrival of the railroad.

The range and magnitude of Morricone’s compositions is immense. In one year alone he was reported to have composed 20 film scores. 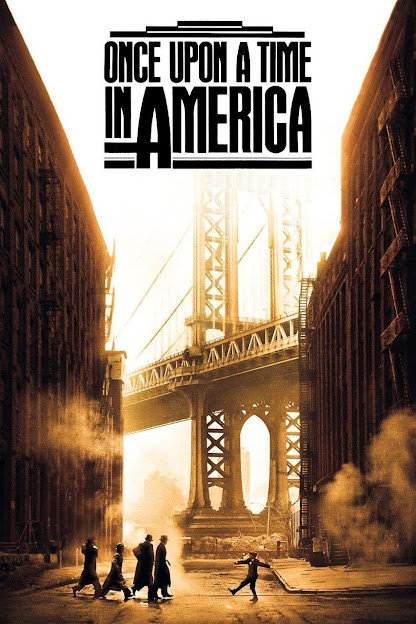 Without doubt one of his most lauded scores was for Leone’s final film, Once Upon a Time in America.

Once again the score was written before the film was shot with Leone playing it on set to help create an ambience for the scenes being shot.

Deborah's theme from Once Upon a Time in America

In this epic gangster film the story jumps from one time period to another as the jigsaw of the story is gradually revealed. The director’s cut, released in 1984 at the Cannes film festival to rapturous applause, was 3 hours 49 minutes long.

But Warner Brothers, who were distributing it, decided that in order for the film to be a commercial success they would rearrange the film chronologically and edited it down to 2 hours 19 minutes. This act of vandalism made it the only film ever to be voted by screen critics as both the best and the worst film released in the same year based on the two edits.

Sadly, one of the results of this shoddy editing by Warner was that Morricone’s name was edited off the credits, thereby excluding him from an American Academy Award on a technicality. (That year the award for best score was won by the film The Right Stuff – does anyone remember the score?)

I suspect that Morricone was unmoved by this omission as it was apparent from my time with him that he had no doubt in his ability and expertise as a composer and was much more concerned with the job at hand. He died on July 6th 2020 at the age of 91 and was composing new scores till his last days.

I believe he was, without doubt, deserving of his preferred epithet. Thank you, Maestro Morricone.