Balearic Beats That Motivate an Island 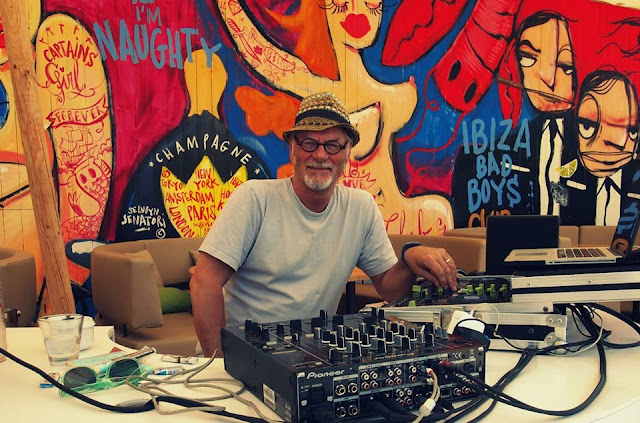 Ibiza has long remained an eclectic paradise that offers freedom in choice for global visitors and residents that have been drawn to the energy and ethos of the island. Every season our lives are soundtracked by a mix of amazing DJ’s setting the scene to enjoy everything from sunsets to afterparties.

It was by unique chance we discovered Howard Hill, who is one of a relatively small group of DJs who continues to champion the original Balearic style of DJing in Ibiza. This sound and character led mix has become a distant memory for some, and was once hailed as the heartbeat of the island, led by prominent icons such as Cafe Del Mar, Jon Sa Trinxa and Cafe Mambo (before becoming a house music mecca).

As a DJ, Howard takes listeners on a musical journey by encompassing a variety of genres and fluidly moving from chill out soundscapes to a modern electronica mix that has seen him grace venues such as Pikes, KM5, Harbour Club, Amante, ME Ibiza, Coco Beach, Es Vive Hotel and Atzaro.

The Electric Mode team sat down with the Balearic DJ to find out what makes him tick, what motivated his move to the island and essentially why his musical choice has become an island staple.

EM: Retracing your steps back, how did you first become involved with the electronic scene?

HH: My adolescence was from the late sixties through to the seventies – a very rich musical period. On reflection I
have always had the rather obsessive, nerdish mentality that seems to be a major character trait of many DJ’s,
however at that time the career path of being a DJ didn’t really exist. My musical obsessions were with the psychedelic rock scene, everything by virtuoso musician and composer Frank Zappa and the endless filigree guitar solos of Jerry Garcia of The Grateful Dead.

Periodically I used to sit down with an old Roberts Radio and slowly turn the dial to see what new music I could find. Towards the end of the 80’s I began to stumble on some of the rather rough and ready pirate radio stations that seemed to be springing up across London. Eventually a friend of mine took me by the hand and said, “take this” and led me to “Rage” on Thursday nights at Heaven under the arches near Charing Cross station. I was an immediate enthusiastic convert!

Sometime around the mid 90’s I visited Ibiza and had a further revelation listening to my friend Jon Sa Trinxa playing
on Salinas beach. I immediately fell in love with the Balearic style of genre breaking DJing that took one on a music
journey. Although I didn’t immediately start DJing myself, when I did I knew that I too wanted to champion theBalearic ethos. 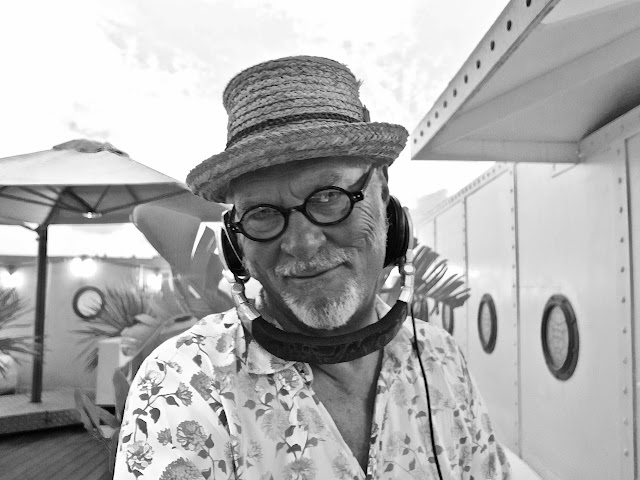 EM: What is Balearic?

HH: Balearic music is often used to describe a downtempo genre of dance music. However Balearic is also used to describe a style of DJing. How would I describe it? Well Balearic has a sunny complexion. It’s eclectic, all embracing. A friend of mine calls it kaleidoscopic. Yes some Balearic is lush, sweet and tranquil but too much tranquillity turns your brain to mush so for me it’s the light and shade. It can be dramatic and deep but essentially it has a positive tone. Sometimes Balearic makes you want to dance for joy at other times you just want to close your eyes and drift off. Sometimes Balearic is incredibly beautiful and it can also be very, very sexy.

EM: What inspires your sets or does the curation come from a very deep record collection?

HH: I do have a pretty deep record collection but most of it is in digital format so my home isn’t walled in with thousands of vinyl records. However, I do have a valve driven hifi system and feed it with my treasured collection of vinyl albums which is mainly pre dance music.

In terms of inspiration for sets, it’s all about the people who are around me. In over 20 years of DJing I have never once arrived at a gig knowing what track I am going to play to start off, let alone what is going to follow. Of course I have favoured tracks of the moment but I might also abandon these if I think that something else would be more appropriate. I like to play a track and see what ripples it makes.

EM: What sort of venues do you prefer playing?

HH: My preferred venues (and where I spend most of my time) are beaches, poolsides, rooftops, and cocktail bars.

Most of these are venues where there is no absolute requirement to dance but where no one would think it out of
place if one did. However, just because people aren’t dancing certainly doesn’t mean you are not connecting with
the audience. I have often noticed that younger DJ’s, who are more used to playing clubs, often feel a bit uncomfortable if people aren’t dancing and so try to push people musically. The response from people in beach bars and poolsides is much
more subtle but I have often said that I welcome head nodders and horizontal dancers at my gigs. The clientele at
many of my gigs are often a bit more mature too. My audiences are often musically educated and so will appreciate
the weird and wonderful remixes that I frequently drop and also wont mind if I take them off the dance menu
altogether for a short time.

I would find it very hard to name a top 5 sunset tracks. My favourite tracks will change but my style remains pretty consistent.

HH: I have a dream (which seems to be gradually unfolding) of taking the Balearic vibe to more of the major cities in
the world. I am certain that I will find many lush cocktail lounges, rooftops and other similar venues that would be
ideal places to unfold my musical moods.


EM: What are the marked differences between you and a modern DJ’s approach to performance?

HH: I think I am a modern DJ. I am totally committed to the digital method of playing and try to challenge the concept that true DJing only exists in clubs. Perhaps in some ways I would regard myself as a musical curator in that I certainly value musical selection over the much vaunted skills of mixing. However, I try not to compare myself with others. I would say though that I think there are rather too many DJ’s who seem to promote style over enjoyment. Yes, by using such things as mixing in key it is now possible to produce a seamless beatmatched set. How boring. Sometimes I will consciously drop in a track that is a surprise because I feel that I
need to wake people up not lull them to sleep with a featureless set.

EM: What artists do you feel are seriously under promoted these days that should be further along the current industry chain? What excites you most about their talent or productions.

HH: I think I will answer this question the other way round. I have often been entranced by a new track to the extent that I would then start following the producer in the hope that further works of greatness would follow. Often they don’t. In most cases I think that talent and creativity will out. Henrik Schwarz, Joris Voorn and Acid Pauli consistently produce great work, whether it is remixing someone else or producing completely unique work of their own. Sadly many other producers who have used producing as a way to enhance their life as a DJ often fail to excite me. They can not avoid playing mostly their own music in their sets which then become rather two dimensional. Maybe DJ’s should take an oath of none partisanship. This is difficult when they have been booked on the back of the music they themselves produced.

Recently a young aspiring DJ asked me what advice I could give him. I suggested he listen to as wide a range of music as possible and also learn to play a musical instrument so that he would gain a bit of understanding about the way that musical structure and chord changes work. Undoubtedly there are some great producers out there who can’t play any musical instrument but that are expert at creating a groove of depth and subtlety. 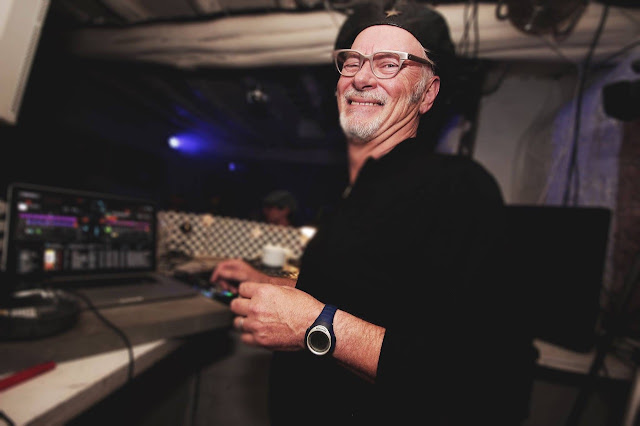 EM: Name your 5 top tracks (not so secret) that you always showcase during your sunset sessions and why.

HH: I find it amazing how conventions can be established in music which everyone then follows. With sunsets the idea generally seems to be that the tone will be chilled and lush (or sometimes so chilled that you wont even notice what is playing). I recently played a sunset from a rooftop bar to the accompaniment of a Jazzy Drum and Bass sequence. I was a bit nervous at first but after a stiflingly hot day followed by an awakening cool breeze it proved to be remarkably appropriate and popular. As I hope this illustrates I would find it very hard to name a top 5 sunset tracks. I would much rather people get to know (and hopefully like) my style of mixing rather than individual tracks. My favourite tracks will change but my style remains pretty consistent. There are often groups of tracks that are favourites so here are a few of my mixes that I would recommend.

As always I have a preference for ‘Sunny’ beats which to me feels as though it is an essential part of the Balearic ethos but this also contains a number of other tracks which I chose to call ‘Wonky’. I can’t really explain this but hopefully all will become apparent as you listen.

This mix features two musical fascinations. First what I would term ‘Organic’, which comprises traditional tribal music, primarily from South America, with a minimal techno twist. The secondly genre I call Deep Desert. It is influenced by middle eastern melodies and instrumentation but with Deep House sensibilities. These are combined with a further selection of Sun Drenched Techno including a couple of ‘Granular’ tunes – you’ll see what I mean.

This mix really is a bit of a journey, taking in everything from Nu Disco, Drum & Bass, Latin, Reggae and some less
definable genres.

This mix is from a few years back but I think it has stood the test of time and I still love many of the tracks on it. I’ve
long enjoyed psychedelic flavours in music and over the summer months playing round pools and beaches of Ibiza I
began to realise that phased and trippy tones go very well floating on the breeze. This is a collection of  favourite spaced out tunes. A little music for the mind and dancing feet.

If you would like to see the original of this article or see many more features and articles about the electronic dance scene here is a link to Electric Mode.

Posted by DJ Howard Ibiza at 00:06 No comments: